I have a flaw. I am not competitive or aggressive in any form or fashion. I know that this has driven my parents, especially my dad, crazy as they have watched me play sports growing up. When I was in fifth grade, my dad signed up to coach the girls basketball team at my small, private school. I think that there were only seven players, on a good day. Which explains how they let me keep my spot on the team, we just really needed warm bodies. Many things held me back from being a good player, like my lack of athletic ability and practice, but I think the thing that held me back the most was my unwillingness to fight over the ball.

See, I don’t know if this is a normal thing that people do during basketball games, but during these little league games, players would literally be on the ground wrestling one another for the ball. I would just stand there and watch. I might run around in a little circle so that people would think I was doing something, but I was actually just running from the conflict on the ground. Some of my favorite childhood memories happened that season. We were by far the smallest, least experienced, and weakest team but a few of us wanted to win. We also had a really enthusiastic dad as a coach, who delivered some of the most powerful pep talks that I know he had been waiting all of his life to use.

Now, with all of that being said, I think about my own personal life. I think about how even though I won’t fight for a ball or try and win a competition, I will fight for things that I want. I will grab a hold of a desire or a circumstance that I feel like I want or need with a death grip and decide that I am never letting go. I will tell myself and God, “No, this is what I want. This is what is best for me.” And I will just grab tighter and tighter and believe it is what is best for me.

When I saw my teammates on the court, fighting for possession of the ball (I am very thankful for their sacrifice), all I could see was danger. I could see the possibility of injury and I felt like it wasn’t worth it to me. It is so easy for me to turn a blind eye to the danger up ahead when I have a tight grip on something that I want. I feel like there have been so many times in my life when I look back to where I held onto things that I knew weren’t the best for me and see where I missed out. We find so much more freedom when we let go of the ball. I encourage you to think about areas where God may be asking you to let go of the ball. We cannot fathom the possibilities that are out there for us if we would just quit trying to wrestle the God of the universe for control. I often think of the quote by C.S. Lewis that says,

“It would seem that Our Lord finds our desires not too strong, but too weak. We are half-hearted creatures, fooling about with drink and sex and ambition when infinite joy is offered to us, like a ignorant child who wants to go on making mud pies in a slum because he cannot imagine what is meant by the offer of a holiday at the sea. We are far too easily pleased.”

Psalm 84:11 says, “For the Lord God is a sun and shield; the Lord bestows favor and honor. No good thing does he withhold from those who walk uprightly.” It is easy for us to look at that verse and like the idea that God is not holding back good from us. But what are we holding back from Him? What are we not willing to give up?

In summary, I would like to admit that my lack of aggression can be a character flaw. Thankfully, it is not as detrimental now that I don’t have to take P.E. class. If you ever need a good laugh, just ask my dad about my history with sports and he will probably look at the ceiling and say, “Oh, that killed me.” He is so passionate about sports and for that I am grateful. I will go down with the ship for almost anything, except winning a game. Also, I will not be offended if you don’t ask me to join your basketball team, it is for the best. 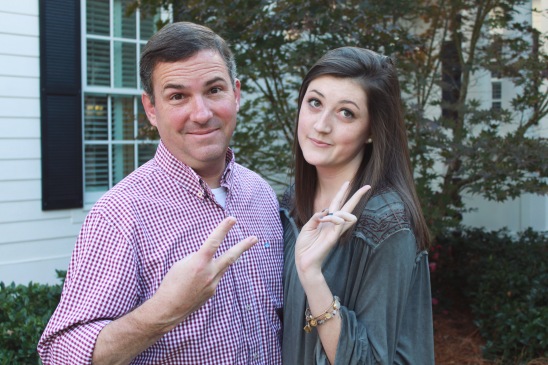 Here is a picture of me and the most patient basketball coach ever.

Looking for something specific?